*Sam’s journey toward CF complementary and integrative medicine is told here in her own words, be sure to check out her blog for more updates and news http://dutchmagicfactory.blogspot.ie/ We at the TLT4CF are grateful for Sam for letting us share her story to inspire other parents to empower themselves with knowledge and work together and you never know…. 🙂

How it all began

J was born through a C-section and was fed formula from birth as I was unable to breast feed due to complications and a large amount of antibiotics I was receiving. During this period J was progressing fine weighing about 8 kg and then at 6 months we changed formula and almost immediately he began to lose weight, began getting regular colds and general running nose, along with diarrhoea, his doctors prescribed him asthma medication and allergy meds but still his weight was not maintained.

After about the year mark finally he reached his original 8kg again. I switched to Soy Formula and he gained 2 kilos within the month, I noted his airways started to clear, his runny nose decreased and amazingly we were able to stop all asthma and allergy meds. I personally had suspected a food allergy to the other cow’s milk based formula and I began to cautiously add regular foods. The less soy he was getting the more we began to notice strange smelly diapers or oily stools with orange spots and they just looked very strange, nothing I’d ever seen before. Of course I immediately searched the net and consistently came across Cystic Fibrosis which began to ring alarm bells so I brought J to visit our paediatrician where a blood sample was taken for CF mutations and a stool sample test was done for Giardia infection (an infection known to cause malabsorption).

The Giardia tests came back positive and I was for the moment relieved, in a way to hear it wasn’t CF and just treatable infection. After some time visiting J’s doctor for a check-up to see if the Giardia infection had cleared, the test results were back on the CF mutations. Only one mutation had shown in the test (delF508) and I was told if no clinical symptoms of CF were present, then further testing was not needed. At that moment I was somewhat relieved but also confused could he still have CF? At the time my knowledge of CF was sparse and I began (again) to search on the internet to find out all I could. I found common symptoms J had such as salty skin and sweat crystals in his side burns after all the heat as we lived in Aruba at the time. It appeared to be sand but on further inspection they were actually salt crystals. The paediatrician thought it not necessary to do further testing, but I still had a mother’s instinct that something just wasn’t right and I needed to be sure, so we made an appointment in Miami Children’s Hospital for further testing, where we then learned that J had CF… He was two years old at the time.

We were in shock and devastated and like all parents. I went through a range of emotions: fear, anger, despair but quickly I decided the best route was to learn all I could about this disease and try as to the best of my ability to keep my son as happy and healthy as possible until some kind of medication would become available.

I took in information on his genetics learning he had a “gating” mutation of S1251N and another common mutation delF508. I made a conscious decision to keep an open mind to all possibilities, to learn and garner all the knowledge I could and maybe I could put something together, after all knowledge is power but an open mind to this knowledge is even more powerful!

I began to rack my brains on what had helped J over the years so far to keep him well or improve him when he had gone through a bad patch, one notable thing was the soy formula (Nutrilon brand). So I began to investigate further, what was in there that could help so much? What made him so healthy and gain weight within that month we switched? Then I read about Genistein and CF and it was almost one of my eureka moments where in my mind it was clear this must have had an effect and I began to give him Genistein, in the form of a food supplement.

Further hours of research I came across Curcumin for CF and taking the safety profile of any supplement I gave J into consideration, I added this to his regime. We mixed Curcumin and Genistein everyday with applesauce and added his enzymes, which he was not a huge fan of the taste but he took it for us. 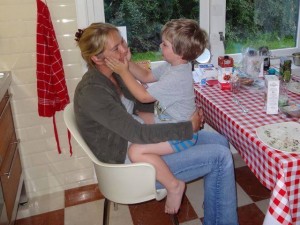 In 2012 the Curcumin the manufacturer changed the packaging of the brand of Curcumin we always bought and I accidentally and unknowingly ordered the wrong Curcumin which contained no piperine (a black pepper extract added to enhance absorption, thereby making Curcumin more bio-available). Within a day or two J’s stools were very bad and we had no idea why. We racked our brains and went through everything from his food, enzymes to the timing of his enzymes and even increasing them but nothing we tried worked over the next few weeks, until one day we gave a second capsule of Curcumin and the stools improved within the day. At the time we were certain Curcumin was doing wonderful things for him. It wasn’t until three months later  (I know for all my observational skills this one slipped!), I was facing the packaging and while eating a bowl of cereal I decided to read the packaging (as you do) and I suddenly noted that the capsules we had been using had no piperine with the Curcumin!

Almost immediately when he was back on the Curcumin with piperine things improved tremendously and we were more reassured that this combo was doing something for him. We noted something new happening which was a “wet cough” which we thought had to get treated with antibiotics and it made us wonder if for the period he didn’t have piperine with Curcumin did this leave him susceptible to infection? Or it may just have being coincidence but over time and through my blog I’ve learned from others taking and giving the combo of Curcumin and Genistein that they too reported a typical “wet cough” with every typical dose increase, which may be caused by better hydration of the lungs and perhaps a balance of the CFTR within the lung? Thankfully it also subsides within a few days or weeks depending on the amount of increase or the amount of “old mucous” the particular CF patient has to clear from their lungs. To my amazement and strangely the only journal I have a subscription to published an article of the synergistic potentiating effect of the combo by TC Hwang, which again reaffirmed my belief that this was the way forward. Of course this was in G551D mutation not the S1251N that J has but by that time, I’d done enough research to understand that the S1251N defect is similar to G551D and likely the combo would work well for S1251N mutation also.

We have noticed that dissolving Curcumin in hot (soy) milk improves absorption. We microwave about 30ml to boiling point, take it out of the microwave, open one Curcumin capsule, poor it into the milk. Stir, strain a few times, and stir some more until all is dissolved, than mix it into 200ml of chocolate milk (hot or cold). If a seven year old drinks it without complaints, it must be palatable for most everyone. Another idea might be dissolving Curcumin in a cup of hot soup. But this pre-dissolving is not necessary. Just taking a little more Curcumin would give you the same added effect.

Finally the results so far are amazing!! 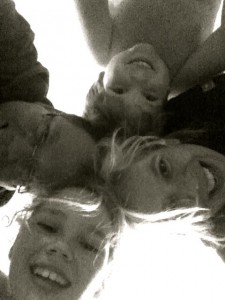 The latest sweat test came back at 59mmol/L!! We’re below the magic 60!

How the sweat test is used for diagnosis of CF:

Some might think a drop in sweat chloride levels could be a coincidence or something that can happen spontaneously. It doesn’t. I did not pay attention in Statistics class on how to calculate the chance that this is a coincidence, but if I’d had to guess it would be p=0.000andalotmorezeros1. This doesn’t just ‘happen’ in CF. Below are some graphs from scientific research articles on the new medication (Kalydeco/VX770)) for CF that corrects the underlying defect. You’ll see that the drop in sweat chloride we have found (minus 59mmol/L) is even greater than what is seen on 150mg of Kalydeco. (Please note that the drop from 118 to 59, is coincidentally the same as the absolute result of the sweat test, which is also 59)

All in all, it’s completely experimental. Yes, there is scientific evidence it works in a laboratory setting (‘in vitro’) and on living human cells (‘ex vivo’), but we absolutely don’t know what happens in the CF body (‘in vivo’) after taking this combination of supplements.  There is nothing I can say about safety, except for my son taking no more than the daily recommended dose of both supplements (adjusted for his weight) for the last 5 years and noticing no ill effects. Only recently, after discovering the fact that Curcumin and Genistein can really can correct the underlying defect in CFTR function, we have gone up to a much higher dose, while keeping a close eye on J for any side effects.

What else do we do?

Of course we don’t solely rely on a single thing to keep J healthy we also do multiple other things such as a no shoe policy in the house and a laughing policy!! Big belly laughs as much and as often as we can!

We don’t do physical therapy or airway clearance we prefer to do lots of exercise as a family and have a trampoline outside, along with many other toys which we all play with, all of which involve active participation and when it’s cold out we have the X-box kinect for indoor exercise with lots of encouragement and activity that involve movement and breaking a sweat! We also had a mattress upstairs in J’s bedroom we would all jump around and dance like a mad house to music for hours but once we noticed the ceiling below the room cracking we thought we better all stop jumping in the same spot, just in case! All in all we believe our healthy lifestyle and eating habits play another large role in keeping J healthy and of course the whole family. In a sense we all learned and benefit from the disease in a way…

The most fantastic news has just come in! We have received funding for a clinical trial with Curcumin and Genistein for S125N patients in Holland! I am proud to be able to tell you that as ‘the spiritual mother’ of this supplement combination (that’s what they called me…), I have been invited to become a  member of the Patients’ Advisory Board of the trial alongside a number of the specialists (adult and paediatric) and a representative of the Dutch CF Foundation. Of course this story is ‘to be continued’ when the results are in! Fingers crossed it will show the same efficacy for  other patients as it done for J!

If anyone has tried, or is going to try these supplements, I would love to hear from you! Please send me an e-mail at curcumingenistein@yahoo.com

*The opinion(s) expressed herein are the sole opinion of the author are not necessarily the opinion(s) of the Tracie Lawlor Trust. Always consult your physician and healthcare team before making any changes to your medical regime. For information purposes only not to be considered medical advice. Please see disclaimer