Pseudomonas aeruginosa infections are the leading cause of mortality for cystic fibrosis (CF) patients . Work over the past decade has demonstrated that the danger of P. aeruginosa infections rests not only in this bacterium’s genetic resistance to many antibiotics, but also in its propensity to live in a biofilm.  P. aeruginosa biofilms comprise a mixture of metabolically active and dormant cells encased by a self-produced exopolymer matrix.  The biofilm matrix has a drastic therapeutic consequence, magnifying the minimum inhibitory concentrations of antibiotics as much as 1000-fold when compared with free-living P. aeruginosa.  Improved strategies to treat and clear chronic P. aeruginosa infections must therefore overcome this protective exopolymeric barrier.  Importantly, while many factors contributing to P. aeruginosa have been identified – including quorum sensing molecules, the secondary messenger cyclic-di-GMP, and genes responsible for making matrix – the mechanisms by which these diverse components interact to establish a biofilm state are largely mysterious.

To address the gaps in the current understanding of P. aeruginosa biofilm development, our studies have focused on uncovering novel components and interactions involved in Pseudomonas aeruginosa biofilm formation, maintenance, and disassembly.  Our approach has been unique in that we developed and implemented a new screen, based on biofilm morphology, which lends itself to the recognition of subtle biofilm phenotypes.  We conducted a transposon mutagenesis screen using a P. aeruginosa strain background in which the biofilm-inhibitory gene amrZ was deleted.  We have completed collecting and analyzing the biofilm morphologies of this transposon library and know the locations of the transposon insertions for the 62 mutants we selected using this screen.

The results of our screen include well-known biofilm-related genes, thus validating our method.  Our results also include uncharacterized genes as well as annotated genes whose roles in biofilm formation are unclear.  For both of these classes of results, we have constructed strains with directed mutations (deletions, complementations, and/or overexpressions) to verify the biofilm functions of the loci we have uncovered.  The biofilm phenotypes of these genes have been confirmed by a qualitative morphological screen as well as by a quantitative Congo Red-binding assay, a standard read-out of structured biofilm formation. 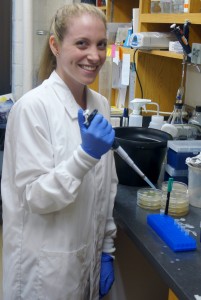 Sara Leiman (BSc) working at her lab bench, under the supervision of Professor Richard M. Losick at the department of molecular and cellular biology, Harvard University, USA

Our group is currently focused on uncovering the mechanisms of action of two uncharacterized genes identified through our transposon mutagenesis screen.  The first gene encodes a putative TetR transcriptional repressor that has been previously implicated in quorum sensing.  Uncovering the mechanism of this protein may not only reveal its specific role in biofilm formation, but it may also elucidate how quorum sensing components may be leveraged for future anti-biofilm treatments.

Our second gene of interest is a hypothetical protein with structural similarity to a known P. aeruginosa cyclic-di-GMP-binding protein.  Cyclic-di-GMP levels are positively correlated with biofilm formation, though the precise signaling pathways by which this secondary messenger regulates biofilm formation remain unknown.  By identifying the localization and interaction partners of this putative cyclic-di-GMP-binding protein, we may be able to shed more light on the mechanisms driving biofilm formation in P. aeruginosa and find new targets for anti-biofilm compounds.

Our future directions are targeted to understanding the biochemistry of the two aforementioned genes as well as several other candidates from our transposon mutagenesis screen.  Among these efforts, we plan to measure and compare the intracellular cyclic-di-GMP levels of our mutants.  We also plan to implement pull-down assays, followed by mass spectrometry, to identify protein-protein interactions and complexes.  Overall, our goal is to combine our genetic manipulations of P. aeruginosa with biochemical analyses to yield a more refined picture of the P. aeruginosa biofilm formation process and facilitate the development of treatments for P. aeruginosa infections.

Sara’s work was co-funded by the Tracie Lawlor Trust and Natural Health Research Institute . For more information on our ongoing research http://www.tracielawlortrust.com/research/